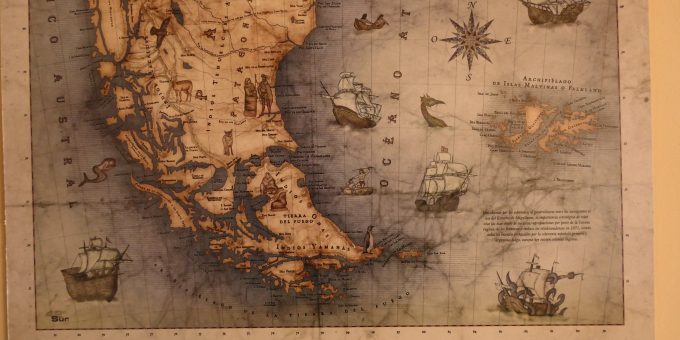 But first, a reflection  on the trip so far, since the last day’s of August, in Southern Africa and Patagonia.

Many of you have asked “what have been the highlights”?

There have been many, BUT, far and away

the biggest one, towering over all the rest (no, it’s NOT a mountain) was the glorious opportunity to spend an entire month at the beginning of the trip with my son, Chris.

We fly down to King George Island and spend time on the Antarctic Peninsula for several days – hiking, kayaking, penguin watching and more. 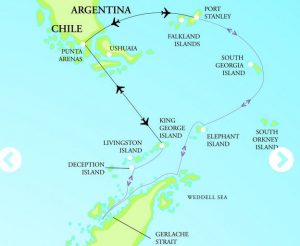 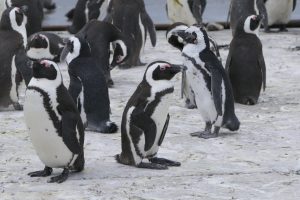 Then, on to Elephant Island (a key part of the Shackleton epic from 1914) and then follow Shackleton’s epic journey to South Georgia from where he was ultimately able to organize the rescue of the rest of his crew from Elephant Island.

Several days on South Georgia, and then crusin’ right along to the Falkland Islands and finally a flight back to Punta Arenas on December 29th.

Interesting side note on the “Falklands” which, for you history buffs, have been “controversial” for a long time.

I found a 1868 map (from the “colonial period”) which identified them as “Archipelelago de Islas Malvianas o Falklands”. 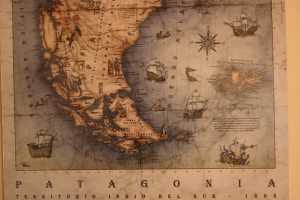 The islands became a British Territory in 1914, and those of us who are old enough remember the 1982 invasion of the Falklands (and South Georgia) by Argentina, and the British “reaction” –

Quoting from Wikipedia “Diplomatic relations between the United Kingdom and Argentina were restored in 1989 following a meeting in Madrid, at which the two governments issued a joint statement. No change in either country’s position regarding the sovereignty of the Falkland Islands was made explicit. In 1994, Argentina’s claim to the territories was added to it’s constitution”.

On current [Argentinian] maps, the islands are shown as Islas Malvinas (Arg), and raising the question in conversations here in Argentina is met with stout defense that they “are Argentinian”.

Curious to see what immigration authorities we’ll encounter when we land there – high probability it’ll be British, and that the currency will by the UK Pound. Stay tuned.

“Radio Silence” on the cruise – very limited internet connection – so wait till afterwards for lots of penguin pictures and other fun adventures.

PICTURES – just starting in a couple of hours, so they’ll have to follow –  stay tuned – back to you after December 29th – have a great holiday.

2 thoughts on “Off to Antarticia & the Southern Ocean”